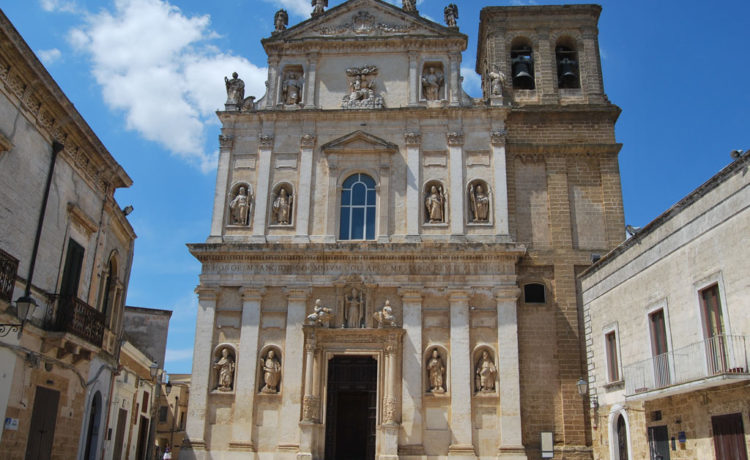 The history of Mesagne is in the Farmhouses

Lace and hanging gardens, centuries condensed into planes and a few steps, a pinwheel of stones, so light to carry as strong to withstand the assaults. Mesagne is the paradigm for understanding the dynamics linked to the urban development of southern Italy between the end of the sixteenth century and the last decades of the seventeenth century.
At the end of the seventeenth century, Mesagne activated a set of mechanisms that profoundly modified its physiognomy. The great transformations took place by the feudal lords of the place, the class of nobles, the clergy.
In the XV century, during the Aragonese age, it was the Prince of Taranto Giannantonio del Balzo Orsini, the most powerful feudal Lord of the Kingdom of Naples, who enlarged the castle, transforming Mesagne into a fortress city.
In the sixteenth century Mesagne had a thriving patrician who planned works of urbanization and architecture concerning the creation of the theater, the hospital, the mountain of piety, the collegiate church and the pavement of the streets.
The authors of the works were the master engineers of the Profilo family, originally from Copertino city, in the province of Lecce, to whom we owe the realization of the pre-Baroque Mesagne that contemplates the palaces of the Resta, the Gaza, the Granafei, the Regina.
In a few decades palaces were built, characterized by windows full of mundane, frames with geometric motifs, ashlar doors, a coating technique that uses stones that protrude from the surface of the wall to diamond point, loggias on corbels vaulted upside down, angular columns, balustrades perforated.
If you are looking for a Farmhouse in Mesagne, Masseria Le Terrazze di Serranova is the ideal accomodation, just 15 km from Mesagne and its proximity makes it an ideal destination for a visit to the Castle or for an aperitif in the beautiful old town.
Our Farmhouse near Mesagne, charming hotel in Puglia, lgbt accomodation in Puglia, is located on a natural terrace overlooking Torre Guaceto but is close to the most important sites of history, art and culture including Mesagne, Ceglie Messapica, Ostuni and the Itria Valley. The isolated location makes it an ideal destination for couples, single travelers, LGBT pet lovers, guests who wants to live in Apulia in contact with nature in the name of relaxation and good food.
From the rooms, you can enjoy a splendid sea view during the day and a romantic moonlight at nightfall. The particularity of the position is not suitable for families with small children who would find the natural terrace uncomfortable.
Today the farmhouses in Puglia represent the umbilical cord between land, man and work, for centuries self-sufficient: only at the end of the eighteenth century, the rural domus became country residence and, in the last thirty years, maison d’hôtes.
Not far from the sea that connects west and east, our Masseria in Puglia is not just hotels, but an experience of silence, sensory exaltation in a rural and chic.
Our farmhouse Apulia Salento is not only a place to stay, but a journey to discover a region that offers much more than the sea: our tours (see on the website”Events” – Matera capital of culture 2019, Polignano a mare, Martina Franca, Wine tasting experience, Alberobello), our excursions, are the meeting between past and present, between tradition and innovation, full of atmosphere.